Vancouver, British Columbia – BeMetals Corp. (TSXV: BMET, OTCQB: BMTLF, Frankfurt: 1OI.F) (the “Company” or “BeMetals”) is pleased to announce the start of its initial phase of diamond drilling at the wholly owned Kato Gold Project (“Kato” or the “Property”) in Hokkaido, Japan.

John Wilton, President and CEO of BeMetals stated, “We are very excited to have commenced our exploration drilling at the Kato Project in a relatively remote but easily accessible area of Hokkaido in Japan. The Company and its advisors regard the Kato Project as demonstrating many geological and gold mineralization features often associated with significant, high-grade, epithermal gold deposits in Japan. Our technical team has selected a number of high priority drilling targets at Kato for this initial phase of exploration. The primary objective for this phase will be to test target gold zones and their continuity based on historical intersections made by the Japanese state entity Metals Mining Agency of Japan (“MMAJ”) during the 1990s.

Previous drilling efforts conducted between 2018-2020 were hampered by the ability of drilling equipment available at the time to penetrate into and through the extensive zones of clay alteration material on the Property.  These altered zones typically surround high-grade gold mineralization in this style of epithermal vein targets, and should be a good indication of robust and extensive gold potential at Kato.  In anticipation of drilling through these clay zones to test the high-grade gold targets, we have secured a brand new SDS C1500 drilling rig that has increased power and drilling mud capabilities to previous drilling equipment used at the Project (See Photograph 1 below).  This coupled with a drill mud circulation system and a re-designed drill hole development plan, should enable us to penetrate the alteration zones and intersect the high-grade veins of gold mineralization at Kato.”

BeMetals has budgeted approximately US$2.0 million for drilling at the Kazan Gold Project (“Kazan”) in Japan this year.  The Kazan portfolio comprises five highly prospective gold projects (including the Kato Project) located on both Japan’s northern island of Hokkaido and southwestern island of Kyushu.  The primary focus of our 2022 exploration program will be to drill the Kato Project on Hokkaido where priority drill targets have already been selected.  In total, some 1,500 metres are initially planned to be drilled (See Figure 1 for project locations).

Japan suspended entry of foreign travellers from entering the country since start of the COVID-19 pandemic, thus the last drilling to be conducted at the Property was undertaken by Kronk Resources, the previous owners of the Property in 2020.  In April 2021, BeMetals acquired Kronk Resources, now BeMetals Corp. Japan, and later in the year contracted Energold Drilling to undertake our 2022 and future drilling campaigns. With the recent lifting of some COVID-19 related travel restrictions into Japan, Energold’s drilling personnel are now able to enter the country and oversee the drilling operations in close association with Tone Engineering Corporation, a well respected Japanese drilling and engineering company.  BeMetals has a full complement of geologists, drillers, assistants and additional personnel, many of whom are based in Japan, at site for carrying out the ongoing exploration activities at Kato and our other prospective gold projects in Japan.

In anticipation of encountering potentially challenging rock conditions at Kato, BeMetals has imported through Energold Drilling, a brand new SDS C1500 drill rig.  This new rig is expected to significantly improve drill hole development and advancement as we bore through the often softer zones of clay alteration and into harder areas of gold bearing veins. Such altered zones are known to be developed around high-grade gold mineralization found at low sulphidation epithermal gold vein systems in Japan and in other parts of the world (See Figure 2 for targeted area of alteration at Kato Project).

The Kato Gold Project is BeMetals’ most advanced exploration project in Japan based on the amount of available historical drilling information, and the Property covers close to 2,000 hectares in central Hokkaido. The Kato Project (historically referred to as the Seta River Prospect) is an example of a remarkably well-preserved epithermal gold system.  Outcropping of clay-altered units are evidence of a high-temperature steam-heated zone above a hydrothermal gold plumbing system. This mineralization style is an example of a low-sulphidation epithermal system and the classic analogy for this mineralization type in Japan is the Hishikari Gold Mine, on Kyushu Island.  Global examples of this type of mineralization include Lihir (Papua New Guinea), Kupol and Julietta (Russia), Waihi (New Zealand) and Masbate (Philippines)*. The Property was previously drilled by the Japanese state agency MMAJ in the 1990s and during that time results included high-grade intervals of gold such as 17.5 metres grading 8.15 g/t Au in hole 5MAHB-2 and 18.65 metres grading 5.01 g/t Au in hole 7MAHB-1.  *Please refer to technical report entitled, “Kato Gold Project Japan NI 43-101 Technical Report” with an effective date of July 13, 2021.

From 2018-2020, Kronk Resources drilled several holes that intersected a zone of hydrothermal breccia near the adjacent main alteration target vein. Their results included hole KT19-02A which returned a number of zones of gold mineralization such as 14 metres grading 2.10 g/t Au.  In 2020, drilling intersected over 50 metres of clay alteration, hydrothermal breccia, vein breccia, stockwork, and banded quartz-adularia low sulphidation epithermal veins in hole KT20-010.  That hole intersected 58.9 metres grading 0.76 g/t Au, including 7.4 metres at 2.99 g/t Au, and ended in 2.8 metres grading 3.1 g/t Au. Due to a lack of bore hole casing the hole was lost in a mineralized zone and is thought to have not intersected the full extent of the high-grade vein target. Table 1 below illustrates highlighted historical gold intersections from the Kato Project. A complete list of drilled intersections at Kato was included in the Company’s news release dated; July 28, 2021, BeMetals Completes Technical Report for the Kato Gold Project in Japan and Identifies Four High Priority Targets for Drilling.

These drill results are historical in nature. The main mineralized zone has only been completely crossed by three widely-spaced holes so the orientation and true thickness of the mineralized zone is currently not known. A nominal cut-off grade of 0.5 g/t Au has been applied to determine the boundaries of the intersections. * Drill hole ended in mineralization. 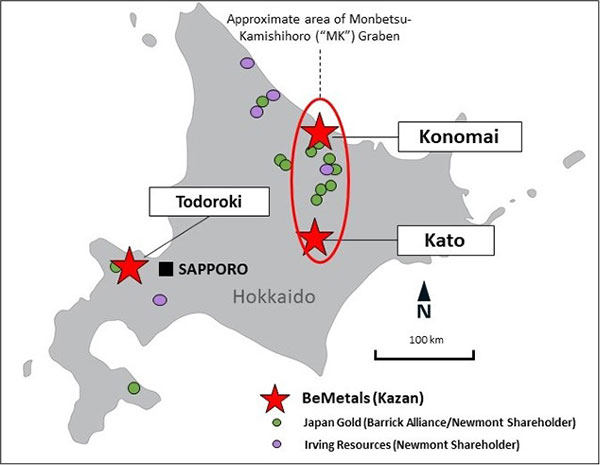 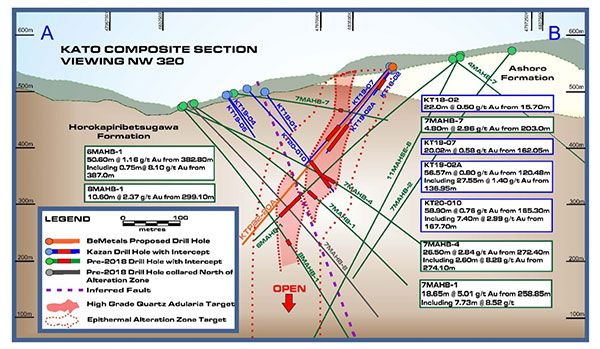 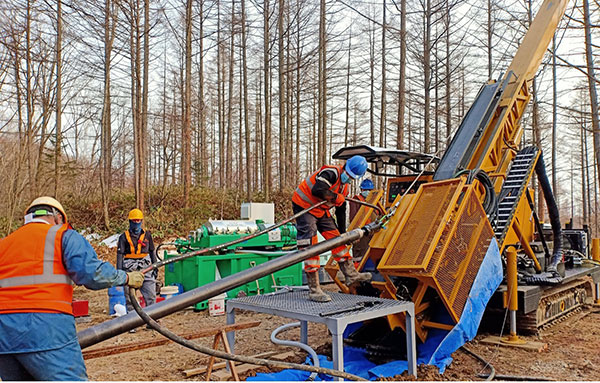 BeMetals is a precious and base metals exploration and development company focused on becoming a leading metal producer through the acquisition of quality exploration, development and potentially production stage projects. The Company has recently established itself in the gold sector with the acquisition of a portfolio of wholly owned exploration projects in Japan. BeMetals is also progressing both its tier-one targeted, Pangeni Copper Exploration Project in the prolific Zambian Copperbelt, and advancing its high-grade, zinc-silver-gold-copper exploration at the South Mountain Project in Idaho.  Guiding and leading BeMetals’ growth strategy is a strong board and management team, founders and significant shareholders of the Company, who have an extensive proven record of delivering exceptional value in the mining sector, over many decades, through the discovery, construction and operation of mines around the world.