Vancouver, British Columbia – BeMetals Corp. (TSXV: BMET, OTCQB: BMTLF, Frankfurt: 1OI.F) (the “Company” or “BeMetals”) is pleased to announce the completion of its 2022 aircore campaign, the definition of copper targets and commencement of core drilling at the Pangeni Copper Project (Pangeni” or the “Project” or the “Property”). The Project is located on the western extension of the prolific Central African Copperbelt in Zambia (the “Zambian Copperbelt”).

HIGHLIGHTS OF THE COMPLETED AIRCORE PROGRAM AND CORE DRILLING TARGETS:

Note: Intertek Genalysis completed this previously reported analytical work of the intervals above with the core samples processed at their preparation facility in Kitwe, Zambia. All analytical procedures were conducted in an Intertek Genalysis laboratory in Australia. Reported widths are drilled core lengths as true widths are unknown at this time. Based upon current data it is estimated true widths range between 80 to 90% of the drilled intersections.

John Wilton, President and CEO of BeMetals stated, “We have now completed another phase of aircore drilling and are excited to have commenced core drill testing of six newly defined targets as part of our 2022 exploration program, funded pro-rata by both BeMetals and JOGMEC. The new targets were generated by the recent aircore program in combination with the historical data. Three of our targets are related to potential extensions of prospects where we previously intersected significant copper mineralization (Q, D, and SW Prospects) and the remaining three are newly generated or have been defined with data from the 2022 and prior aircore drilling information.

We currently interpret our D and SW Prospects to be related to basement hosted copper mineralization similar in style to Barrick Gold’s Lumwana copper mine in Zambia while the Q-Prospect, and potentially P and G targets, are in Katangan host units with similar geological settings to First Quantum Minerals’ Sentinel mine some 130 kilometres to the northeast of Pangeni. The Company expects to test at least five of the targets with six to eight core drill holes.”

From July to September 2022, 3,619 metres of shallow aircore drilling were completed at the Pangeni Project. The copper anomalies and targets resulting from this campaign are illustrated on Figure 1 below in context with the results of the prior aircore programs previously reported. The primary objective of the aircore drilling is to generate targets for concealed copper deposits under the thin Kalahari sand over to be subsequently tested by core drilling.

Figure 1 shows the locations of the priority new targets generated and defined potential extension of previously discovered copper prospects from the 2022 aircore results in combination with the previously reported phases of drilling. The aircore holes were spaced at various distances along the lines from 400-metre to 200-metre and 100-metre infill centres based upon field results and geological observations of the drill cuttings. The exploration program is jointly pro-rata funded by BeMetals and Japan Organization for Metals and Energy Security (“JOGMEC”).

Figure 2 shows the combined 2022 and previously reported copper aircore results in the Q-Prospect and E8 Target areas. At the Q-Prospect, drill hole Q3-C1 completed in 2021 intersected 4.14 metres grading 0.62% Cu (from 92.36 metres drilled depth) of copper oxide mineralization hosted within siltstones interpreted to be part of the Katangan Supergroup near interpreted basement units. Many of the world class, sediment-hosted, copper deposits and mines of the Central African Copperbelt occur in this same geological setting when coupled with favourable structural feeders for the copper mineralization.

The copper anomaly in aircore hole Q3-03 of 1,545 parts per million (“ppm”) copper, represents a target for core testing some 150 metres stepped back from drill hole Q3-C1 (Figure 2). Aircore hole Q3-12 with 502ppm copper, with copper oxide minerals identified in logging chips, also provides another potential follow-up target in this area dependent upon initial core information from the Q3-03 target.

Target E8 is situated to the northwest of the SW-Prospect as depicted on Figure 2. This relates to a 695ppm copper in bedrock anomaly in aircore hole E8-03 which is supported by a 903ppm copper in the Kalahari sand just above the bedrock contact.

Figure 3 shows the location of 2022 aircore hole D5-06, which returned 1,424ppm copper in bedrock  approximately 600 metres to the southwest of an untested 556ppm copper anomaly in D2-13. The D5-06 target represents a potential extension of mineralization first discovered at the D-Prospect near the end of 2019. Based upon this and subsequent core drilling results, this area remains an important target area for further exploration.

Thus far, copper mineralization in this area extends for at least 1.2 kilometres along the interpreted strike of the mineralization including holes D7-C1, and D7-C2. These core holes returned meaningful and multiple copper intersections ranging from 6.0 to 2.12 metres in width and 0.58% Cu to 0.32% Cu in grade (0.3% Cu cut-off grade). To date, significant copper mineralization has been intersected in five of the six core drill holes completed at the D-Prospect. The copper grades in many of the previous drill holes are similar to those for operating large-scale copper mines in the Domes Region of the Zambian Copperbelt (Examples: First Quantum Minerals’ Sentinel Mine Reserves: 876.8 million tonnes grading 0.46% Cu(1) and Barrick Gold’s Lumwana Mine Reserves: 538.8 million tonnes grading 0.56% Cu(2)). (See Figure 4 for other regional project locations).

Figure 1 shows the location of newly defined, stand-alone copper targets on the P, G and K aircore lines. These targets for potential core drilling are focused on aircore holes P1-07B, P1-11A, G2-06 and K2-03B with copper anomalies of 699, 473, 1,447 and 495ppm respectively. The targets at the southern end of the P line specifically are currently interpreted as being potentially hosted Katangan units. Decisions on which of these targets to be tested, and their priority for the 2022 core drilling program will be made as the program advances based upon the geological information.

Tables 1 and 2 below provide details of the aircore anomalies discussed with hole ID, azimuth, dip, end of hole depth and collar coordinates. The quality assurance and quality control section below describes details of the sampling and analytical procedures. 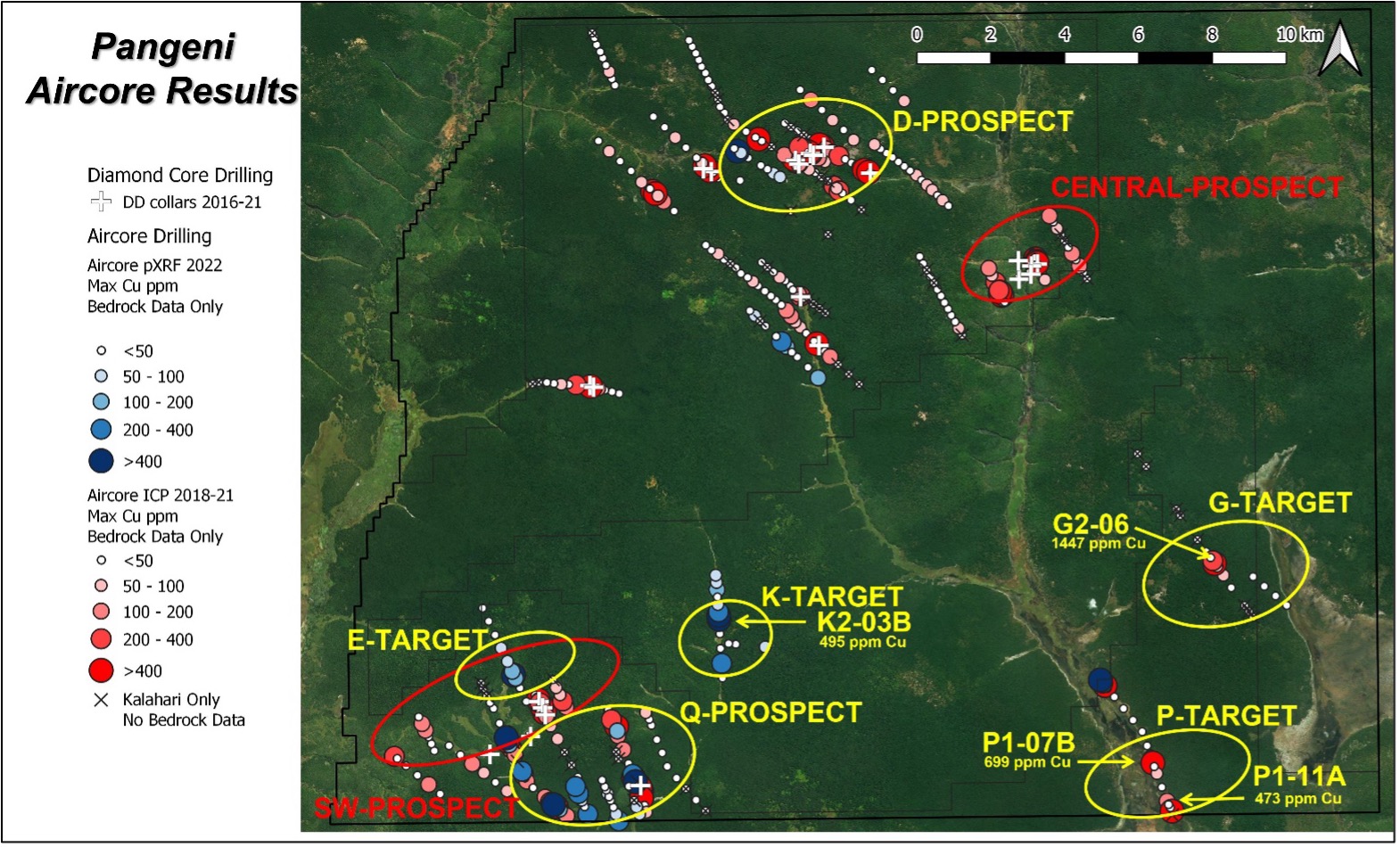 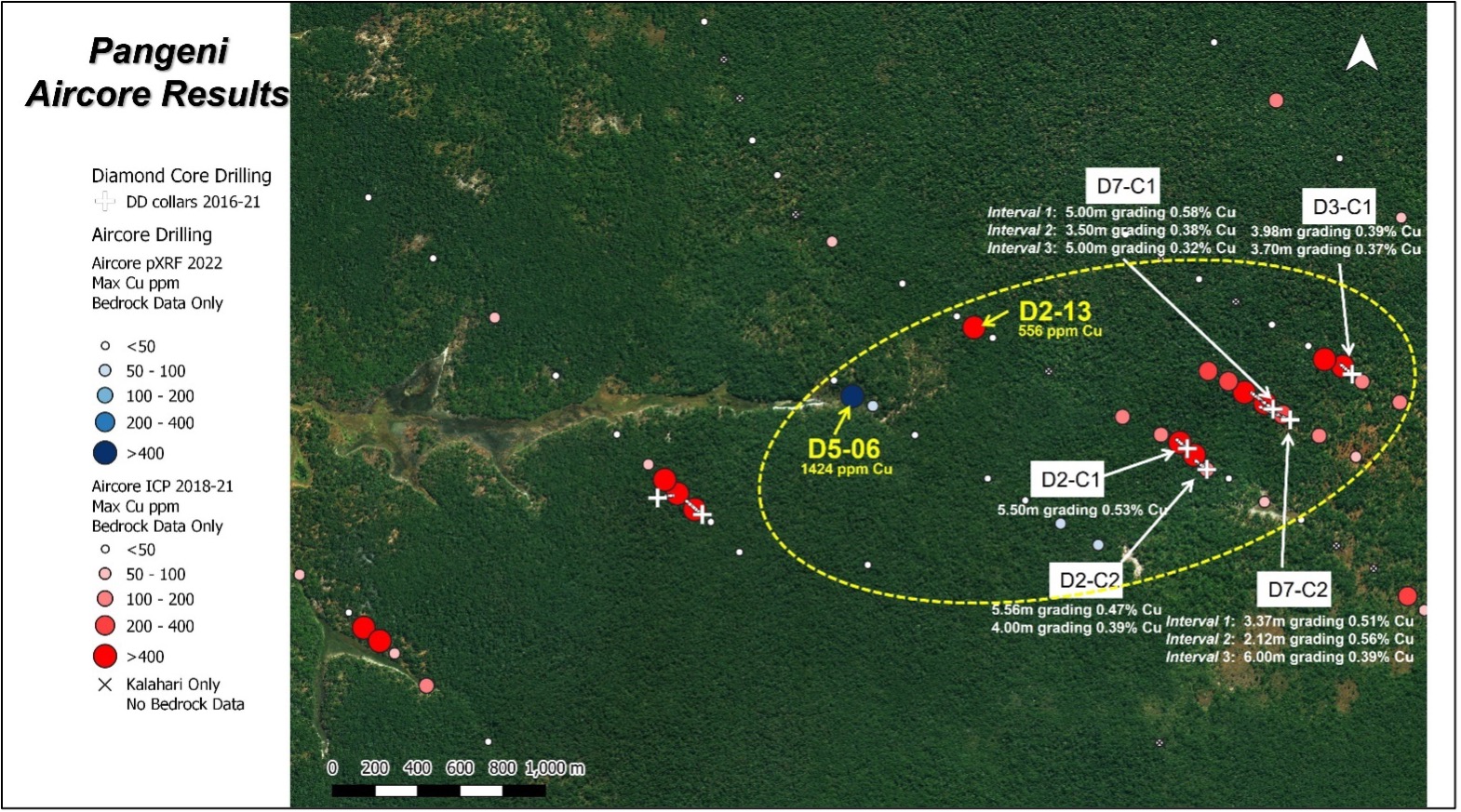 The results reported here for core drilling and pre-2022 aircore (ICP) drilling were analyzed by Intertek Genalysis, an independent and accredited laboratory. Samples were prepared at their facility in Kitwe, Zambia and analytical work conducted in Australia. The results were determined using multi-acid, near total digest, and analyzed by Inductively Coupled Plasma (“ICP”) Optical (Atomic) Emission Spectrometry (“OES”). The core sampling was conducted with a robust sampling protocol that included the appropriate insertion of standard reference material, duplicates, and blanks into the sample stream.

The results from the 2022 aircore (pXRF) program were completed by Remote Exploration Services (“RES”) who managed all aspects of the field operations in-line with the standard operating procedures as previously and consistently implemented at this project. Representative material from each sampled metre of aircore drilling was dried, screened to 180 micron, bagged and transported to a field camp where they were analysed using the Olympus Vanta C Series Desktop XRF analyser (“pXRF”). Strict sampling protocol was observed throughout the pXRF analysis including; homogenisation, field duplicates, blanks, and calibration checks using Certified Reference Material. For a more detailed description of the aircore pXRF sampling protocol see BeMetals news release dated; November 15, 2018, QA/QC section.

Field operations and management have been provided by RES an independent geological consulting and contracting company. The aircore and core drilling was conducted by Blurock Mining Services, of Kitwe, Zambia. 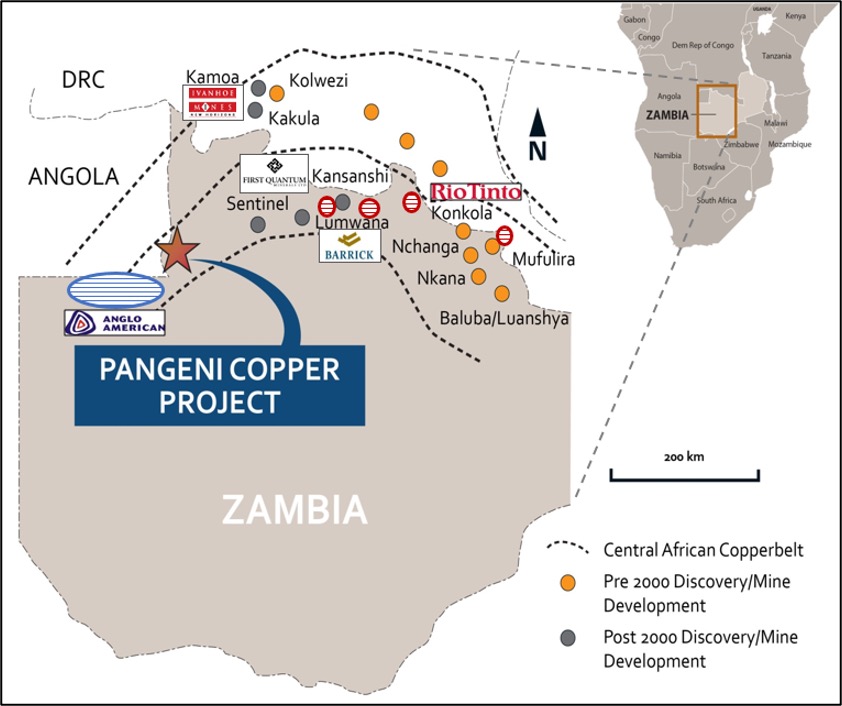 The technical information in this news release for BeMetals has been reviewed and approved by John Wilton, CGeol FGS, CEO and President of BeMetals, and a “Qualified Person” as defined under National Instrument 43-101.1